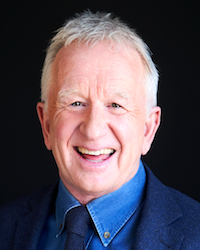 Description: Canada’s #1 road warrior and star of a record breaking nine one hour critically acclaimed television specials, award winning comedian RON JAMES returns to rock the Imperial Theatre to the rafters, delivering ninety minutes of non-stop laughs with his all-new show, ‘Hindsight Is 2020’. After a year spent surviving this white-knuckle ride on the ‘Corona Coaster’, come laugh the plague away with the man whose been selling out theatres from coast to coast for more than twenty years! His first book, ‘All Over the Map: Ramblings and Ruminations From One Canadian’s Road’, will be published by Penguin-Random House September 2021

‘A man of a million words and a million laughs…genius’…

Consistently hailed by audiences and critics from coast to coast, RON JAMES has been selling out theatres in Canada for more than 20 years. This verbal gymnast marries a comedian’s eye for satire with a writer’s ear for language, taking fans on a non-stop roller coaster ride, that cuts a wide swath through contemporary culture, with razor sharp wit and a poetically honed delivery. He has written and starred in a record breaking nine one-hour critically acclaimed CBC comedy specials; created and starred in two television series and September, 2021, the publishing giant Penguin-Random House, will be releasing his first book, ‘All Over the Map: Ramblings and Ruminations From One Canadian’s Road’.