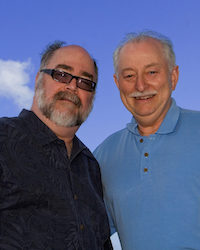 Description: Kevin Evans & Brian Doherty have been an integral part of the East Coast music scene for thirty four years. They have been together as Evans & Doherty for Thirty years. To capture the essence of an Evans & Doherty performance, take a lively blend of traditional, original and contemporary songs, add a liberal sprinkling of stories and humour, then sit back and enjoy these fine entertainers.

As well as performing front and center on stage, Evans & Doherty are involved with many aspects of the music industry. Brian owns and operates Eastern Entertainment Agency, a booking agency and production company which co-ordinates tours of Atlantic Canada for many Canadian and international acts. Kevin owns and operates Modtrad Music, a publishing company, through which much of the material performed by Evans & Doherty is published and licensed. Through Eastern Entertainment Agency, Evans & Doherty have produced recordings for a number of East coast groups, as well as three compilation recordings (A Taste Of The Maritimes, A Taste Of Atlantic Canada and An East Coast Christmas) for national labels.

Evans & Doherty along with Jimmy Sweeney, have a recording titled “Sailing Ships & Sailing Men”, the musical companion to a one-hour radio program written by the trio and broadcast on CBC’s Atlantic Airwaves. The program deals with life at sea and the songs used by sailors while they worked.

Equally at home in a pub-setting, concert hall, festival or convention, Evans & Doherty are first-rate musicians, singers, songwriters, promoters and producers. They also possess the ability to entertain any audience, any place, any time.