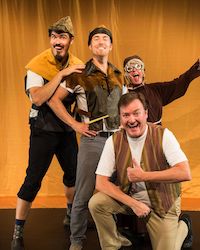 Description: While the King is away, the people of England suffer under the oppressive rule of his tax-happy brother, Prince John. Only a straight arrow like Robin Hood, the best archer in the land, can save England! By stealing from the rich and giving back to the poor, Robin keeps the spirit of justice alive, with the help of a few friends along the way, including Maid Marian, Friar Tuck, and Little John. But what if the Prince and the dreaded Sheriff of Nottingham lay a trap for our hero? With all the humour and fun you come to expect, DuffleBag hits the mark with this on-target tale of derring-do!

THE “NEARLY WORLD-FAMOUS” DUFFLEBAG THEATRE… has been performing since 1992 starting at the London International Children’ Festival, in London, Ontario, Canada. Now based in Toronto, DuffleBag performs over 600 shows a year, across Canada, the U.S., and internationally. Marcus Lundgren is the Artistic Director, and Rod Keith is the General Manager.