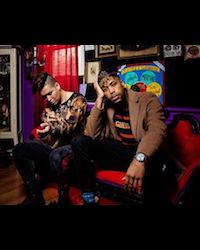 Description: Halifax’s 2020 JUNO Award winning alt-pop group Neon Dreams are back with their new single “Don’t Go Hating Me Now,” streaming everywhere. Produced by Scott EFF and Corey LeRue, Frank Kadillac and Adrian Morris turned a tough realization into a catchy song that’s bound to be a hit. Written with the purpose of shedding light on the harsh realities that come with addiction and loss of self-control, Don’t Go Hating Me Now is a reminder that you can have the hardest, most necessary conversations with those you love most.

The track will be featured on the band’s forthcoming full-length album, due in November. Neon Dreams will follow up the album release with an Atlantic Canadian tour starting Nov. 13, making them one of the few bands touring in North America for the remainder of 2020, much in thanks to the Atlantic Bubble. Neon Dreams has already seen a busy 2020, with the release of their singles Turn Back Now (championed by Billboard), and Sick of Feeling Useless.

In 2019, the duo released Sweet Dream till Sunbeams - an album comprising nine uplifting songs about not fitting in and overcoming adversity - and have continued to drop new material this year, covering subjects from Kadillac’s painful youth to his mother beating cancer. Though they consider themselves to be “alt-pop,” Neon Dreams’ music can’t be pigeonholed. Kadillac likes to describe their sound as “if Adam Levine and Gym Class Heroes made a band that was influenced by early 2000s, late ‘90s inspirational coming of age movie soundtracks.”