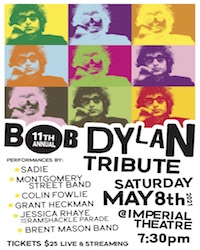 Description: As the Bard of Hibbing enters his 80th year, some of the region's finest song writers and musicians will gather once again to pay tribute to Bob Dylan. For more than a decade this tribute show has played to sold out audiences in southern New Brunswick. It's an exciting development to have it presented in one of the finest theatres in all of Canada. Expect some special moments- if you're a Dylan fan, or a fan of great music, this one is not to be missed.

Brent Mason is a well known, award winning songwriter and musician from Saint John, NB. He's released 11 records and toured the UK, Canada andthe US, and continues to host the longest running open mic in the FreeWorld at Oleary's on Wednesday nights. He started the Dylan tribute as a one-off to celebrate Bob's 70th birthday, and here are 11 years later!