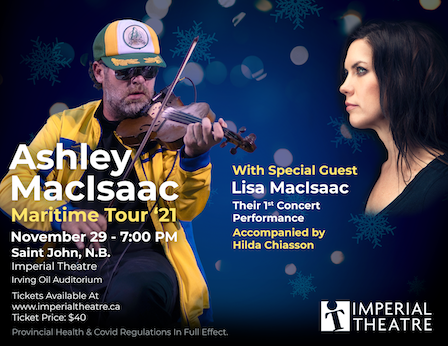 Description: ASHLEY MACISAAC to perform with his sister, Lisa MacIsaac on November 29, 2021 at 7:00 pm at the Imperial Theatre in Saint John New Brunswick for a two-hour performance. Coming off a sold-out concert in Lunenburg, Nova Scotia in September, a rejuvenated and energized Ashley MacIsaac is planning his Maritime Tour 21’ and is excited to cross the border into New Brunswick and perform at the world-class Imperial Theatre in Saint John, New Brunswick.


For the 1st time ever, Ashley will invite his sister, Lisa MacIsaac from the Juno nominated singer-songwriting duo, Madison Violet to the stage at the Imperial Theatre and for his entire Maritime Tour. Long-time friend Hilda Chiasson will be joining Ashley and Lisa and bringing her superb musicianship and beautiful arrangements to the performance! A renowned fiddle player, piano player, and step dancer, Ashley MacIsaac has performed in the Opening ceremonies at the Vancouver 2010 Winter Olympics to a worldwide audience and with artists such as Phillip Glass and The Chieftains. Ashley also played with The White Stripes for their “Under Great White Northern Lights” Canadian tour which was turned into a documentary. So impressed by Ashley’s electric performance and love of bending genres, Jack White has invited him to co-write and perform with him on a country blues song for Jack’s new label based in Nashville.


“It’s always been a pleasure to play in Saint John,” says Ashley MacIsaac (he/him). “With decades of fabulous and memorable shows in Saint John and the surrounding area, audiences have a keen ear and I always try my best when I’m there to play the best show I can. Thirty-plus years later I’m just as excited to play my CB fiddle tunes for an audience that I know will tap their toes and clap their hands as we enjoy the evening and the concert.”