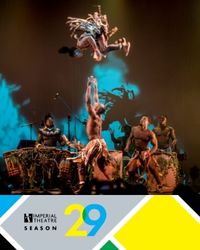 The Afrique En Cirque show symbolizes the strength, agility and joy of life found in African youth. A handful of daring acrobats, accompanied by their musicians, perform to the pulsating rhythm of the djembes of Guinea with their authentic and original choreography and acrobatics. With the melodious sound of the Kora, Yamoussa Bangoura transports us to a place where the diversity of traditional African arts are illuminated, and combined with the virtuosity of a modern North American Circus performance.

Kalabanté Productions was created by Yamoussa Bangoura, a multidisciplinary artist of Guinean origin. Yamoussa’s long term dream was the founding of a school of circus arts, and direct his own multidisciplinary company specializing in the African arts. As the company director he develops his own shows which over the past several years have been increasingly gathering attention and recognition in the Quebec circus arts community and worldwide. Kô Ryass, and other shows such as Kumbaya, Uno, Kira Nene and Afrique en Cirque have been created and performed worldwide. Several new projects are in development for the coming years, which will continue to disseminate and promote the values of the company.

Yamoussa first became interested in the Circus Arts as a young man growing up in Conakry Guinea in the 1990’s. He studied the circus performers he saw on European TV and practiced on the beach and dirt around his home. He also studied the Nyamakala tradition of circus, practiced by the Fula people of West Africa. He eventually joined Guinea’s original circus company, Circus Baobob. with whom he toured Africa and Europe. With this company he was able to spend time in Spain and France where he honed many of the European style circus skills.

In the early 2000’s, he was recruited to come to Canada with Cirque Eloize, a Montreal based Canadian cirque company. While in Canada he also performed with Cirque du Soleil and Cavalia (cirque with horses). In 2007 Yamoussa realized his dream and opened his own company, Kalabanté Productions in Montreal Canada. He recruited many of his extended family members to join the company, including his twin sisters, brothers, and cousins.

The company began doing shows in Quebec, and over the years expanded to all of Canada, working throughout the year. Working at many of the prestigious Children’s Festivals throughout the company, Kalabante has made a name for itself as a top children’s performing group as well as an adult circus performing company.

In 2010 they were part of a special project, the making of the documentary film, Circus Without Borders. The film was a collaboration between Kalabante and a circus company in the Artic, call Artcirq. Artcirq visited Guinea and Kalabante went to the Arctic Circle. Both companies shared humble origins and worked closly on improving conditions in their community for youth and vulnerable community members.

In 2018 and 2019 the company performed internationally at the Sziget Festival in Budapest Hungary and the International Festival of Santa Lucia in Monterrey Mexico before crowds of up to 21,000 people. In 2020, Kalabante will perform a Performing Arts Centre tour in Western Canada, and at Mueca in Tenerife Spain. Also, in 2018, Kalabante opened their own studio and school in Montreal, where there are continuous lasses offered in African dance, cirque, and drumming.

Yamoussa Bangoura, artistic director of the company, works to pass on and share his values and passions in the circus arts. He teaches various artistic disciplines, such as African dance and traditional music of West Africa, that in turn helps one to master the circus arts,

Kalabante Productions is proud to be able to share their original work, achievements, and also assist with the humanitarian mission to help the Guinean community of which Yamoussa and many of his company members comes from.